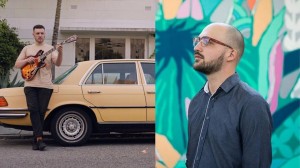 TVQ
TVQ’s (Tim Voutas Quartet) sound is energetic and new, with intricate melodies and rhythms that keep you guessing. The compositions can be fun and cheeky while at the same time take you on a journey through a wave of emotions. This project started in 2016 as an outlet for creativity and since then has grown to create its first album “Introducing TVQ.” TVQ draws upon influences spanning Bill Evan’s harmonic lushness, Art Blakey’s fire, Hiromi Uehara’s flare and Keith Jarrett’s emotion.

Based in Perth AUS, Tim Voutas graduated the GIJ academy big band in 2013 and WAAPA in 2017. From there he has been performing around Perth in his own groups “TVQ” and “The Island Trio.” He is also a member of the Perth Cabaret Collective. Tim was also a part of WAYJO from 2016-2018 where he performed with artists such as Migiwa Miyajima, Kate Cebrano and Julian Argüelles.

Dan Garner
Dan Garner is a Guitarist from Perth, Western Australia. He graduated from WAAPA in 2016 and since then has been performing around town in various groups and genres. Some of his music was played at the 2015 Perth International Jazz Festival with ‘Tedde.’ More recently Dan has performed at the King St Corner Pocket Festival, as well as playing regularly with Mace Francis’ 950 Local and with The Gemma Farrell Quintet.