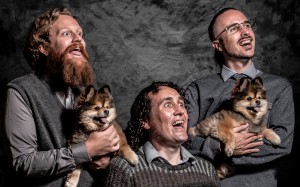 Over four Nights at The Rechabite that align with the two weeks of Art Feast: The Darkness and The Light, a wildly diverse assortment of some of Perth’s most celebrated musos present a series of concerts that rocket from one extreme of the musical genre spectrum to the other.

Experience the latest incarnation of live multi-percussive dance ensemble, The Epic of Gilgamesh, presented by Injured Ninja. It features a cacophonous orchestra of live and electronic instrumentalists, accompanied by multiple drum kits and a fleet of percussionists. The performance surrounds and engulfs the audience with a wall of building sound, filling the space with raw energy.

First manifested in 2009 as part of the closing program for legendary local music venue, The Bakery, the Epic of Gilgamesh has returned from beyond only a few times since. This is set to be its loudest and heaviest reincarnation yet and alongside DJ sets from Trebt & Vetch and live sets and performances from Ohm Rune, Revenant, Ignis Jakeus Pyro and a new Rammstein tribute band called R+ Rated, The Rechabite will have its century old bones shaken to their foundations.

Dark Church and The Epic of Gilgamesh are co-presented by The Church of Belligerence and Injured Ninja for Nights at The Rechabite.

The High ticket holders to Art Feast – The Darkness for each night have entry included for this event included in their Art Feast ticket.