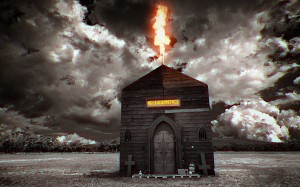 Over four Nights at The Rechabite that align with the two weeks of Art Feast: The Darkness and The Light, a wildly diverse assortment of some of Perth’s most celebrated musos present a series of concerts that rocket from one extreme of the musical genre spectrum to the other.

The first night at The Rechabite features a carefully cleaved line-up of underground noise and metal mavericks alongside the special Church of Belligerence flavour of post-apocalyptic punk gothic ritual, cabaret and spectacle.

With DJs Trebt & Vetch and massive stage sets from Wrath of Fenrir, Giant Dwarf, Dead Jerk, Sonnenmasse, Sister Fiesty and Circus Carnis, this will be a night that will long be remembered and difficult to forget.

Dark Church and The Epic of Gilgamesh are co-presented by The Church of Belligerence and Injured Ninja for Nights at The Rechabite.

The High ticket holders to Art Feast – The Darkness for each night have entry included for this event included in their Art Feast ticket.