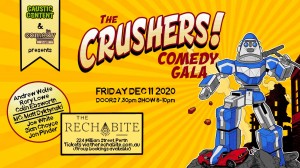 2020 has been a testing year! But to end it on a high with some much-needed laughter, two of Perth’s biggest comedy producers, Ronan Freeburn of Caustic Content and Paul Dragan of Comedy Shack have joined forces to present a very special one-off event: “THE CRUSHERS COMEDY GALA” 💥

🎉A comedy gala to end all comedy galas, showcasing an all-star line-up of comedians that are guaranteed “CRUSHERS”. The term “CRUSHER” in comedy circles is a comedian who is guaranteed to bring the laughs and leave audiences wanting more 🤗

Featuring head “CRUSHER” and MC: Matt Dyktynski (Mix 94.5 Breakfast)
Matt Dyktynski is a comedian. Matt is an actor. Matt is also a Cancerian. Matt can cook reasonably well. Matt spent years based in London, becoming a regular on the highly demanding UK circuit.“... has a show that other stand-up comics would kill for.” Time Out. London.

Andrew Wolfe: “Confident and natural on stage – he has all the trappings of a pro.” Chortle
Rory Lowe: “Rory Lowe f**king killed it” – Bert Kreisher
Colin Ebsworth: “Had the crowd in stitches” - the music
Joe White: “He's been called down under’s Trevor Noah” New York Post
Sian Choyce: Opener for Doug Stanhope, Ari Shaffir and Bert Kreischer
Jon Pinder (UK): 96fm’s Friday morning comedianTickets are now on sale! Get yours before this one sells-out.“THE CRUSHERS COMEDY GALA”