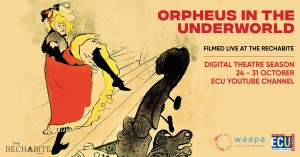 While COVID-19 restrictions continue to limit audience numbers in theatres, WAAPA at Edith Cowan University is thrilled to offer its supporters a week-long digital season of its annual opera.

Orpheus in the Underworld, performed by WAAPA’s Classical Voice students with the WAAPA Symphony Orchestra at The Rechabite Hall in Northbridge, will be available to view from Saturday 24 October until Saturday 31 October on the ECU YouTube channel

With music by Jacques Offenbach and a new libretto by director Nicole Stinton, this comic opera is a wickedly satirical take on the famous Greek myth.In this all-singing, all dancing version set in 1889, an abandoned musician named Orpheus attempts to rescue his wife, Eurydice – from whom he has recently separated – from the legendary Moulin Rouge, the underworld of Paris.Turning the original tragic tale of love and loss on its head, Orpheus is reluctant to rescue Eurydice from the cabaret underworld, and when he fails, everyone is thrilled with the result!

Orpheus in the Underworld features one of the most famous pieces of music in the world: the Galop Infernal, better known as the Can-can, which has become synonymous with the raunchy high-kicking dance of the Moulin Rouge.

“I think this a fantastic opportunity for the students to show off their talents on potentially the biggest stage we have experienced since starting at WAAPA,” says 3rd Year Props and Scenery student Sam Kirkbride, who as workshop supervisor on the production’s set has helped create a Parisian wonderland in The Rechabite Hall.

“With travel and capacity restrictions due to COVID, many family and friends of the students would have missed out seeing the show. Now they can get some of the best seats from the comfort of their home.”