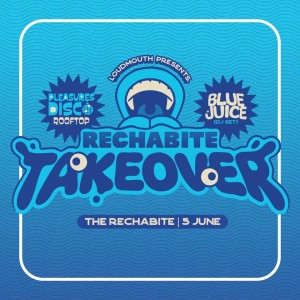 After launching with 3 sold out shows so far, Loudmouth is taking over The Rechabite featuring twice the good times with Loudmouth in the main hall and a Pleasures Disco rooftop takeover.

Holding down the mainstage will be none other than Jake Stone from legendary Aussie band Bluejuice throwing down a special 'One Night Only' DJ set, featuring plenty of Bluejuice bangers alongside a record crate full of dancefloor-ready jams. On warm up duties we've locked in four of the best with BAD Disco, Jaida-Rose, Tomi Bahama, White Pepper and Find Him!

Meanwhile upstairs the Rechabite Rooftop will be home to a night of disco-fuelled debauchery under the stars with Pleasures taking over the sound system, featuring Nicole Filev, Daewoo, Swarley-B, Bexx & Ed Sawle!

~ BIRTHDAY DEALS ~
Celebrating a special occasion? Send us a message and we'll help make your night a special one!~

We acknowledge the Traditional Owners of the country throughout Australia and recognise their continuing connection to land, waters and culture. We pay our respects to their Elders past, present and emerging.