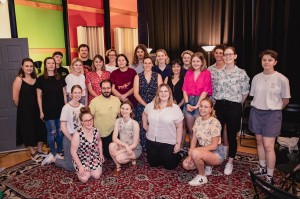 Join us for the launch of our debut album "The Elephant In The Room," an album of original music by Western Australian women.

The Artemis Orchestra was founded by Gemma Farrell in 2017, with the hope of promoting people of marginalised genders in jazz as musicians, soloists and composers. Less than a quarter of all professional jazz musicians worldwide are female, and even less are non-binary and transgender and this is something which we hope will change for the better in future. The goal is that having an ensemble like this, which is predominately made up of professional female musicians, and also includes non-binary musicians, will inspire young people of maginalised genders in Perth to consider taking on a career in jazz. The Orchestra has performed at the Charles Hotel, at the Four5Nine Bar, the Ellington Jazz Club, His Majesty’s Theatre, Somerville Auditorium and the Rechabite. They have collaborated with the Perth Jazz Society, and with the WA Youth Jazz Orchestra, twice making up a band of WAYJO’s young women and non-binary members, with Artemis’ professional musicians. They have also performed for the 2018, 2019 and 2020 Perth International Jazz Festivals. They have performed the music of Shannon Barnett, Kristin Berardi, Jenna Cave, Louise Denson, Sandy Evans, Gemma Farrell, Sally Greenaway, Alice Humphries, Maddie Ivy, Amelia Jutilane, Andrea Keller, Ellen Kirkwood, Alana Macpherson, Kate Pass, Venessa Perica and Candice Susnjar. The band has also hosted composition workshops and reading sessions for band members, and will continue to do so in future.