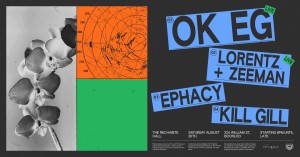 Crab Claw returns to the club, proudly presenting a hybrid night of live performances and DJ sets – a psychotomimetic combination of the synthetic and the organic.

A collaboration between Naarm-based producers Lauren Squire and Matthew Wilson, OK EG generate spaces between hypnotic polyrhythms and lush ambiance by mixing experimental music and visual art. They’ve long been a point of inspiration for Crab Claw and a singular creative force in the Australian dance music scene, releasing music via labels like Wax’o Paradiso, Animalia and Steeplejack.

The duo’s live show takes an improvisational approach to live techno, drawing from natural textural soundscapes to speculate on rich sonic worlds of inhabitation. Their expansive sets draw on left-field techno, breakbeat and drum & bass, moving through moods and genres with deft attention to detail and rare flow – their arrival in Boorloo is long-awaited and not to be missed!

Crab Claw at The Rechabite Hall

Free entry to folks of Aboriginal or Torres Strait Islander descent. Reach out to Crab Claw via Facebook or Instagram to say hello and secure a ticket.

Crab Claw acknowledges the Whadjuk people of the Noongar Nation as the owners of the beautiful land on which we operate, live and party. Sovereignty has never been ceded. We pay our respects to their elders past, present & emerging and stand in solidarity with their ongoing resistance against colonisation.

All key floors of The Rechabite are wheelchair accessible, including the rooftop.. The upper balconies in the Hall are only accessible by stairs. There is an accessible unisex toilet in the basement. Flashing lights and haze will be used in the main room. If you have any accessibility questions or requests please don’t hesitate to message the Crab Claw Facebook page.