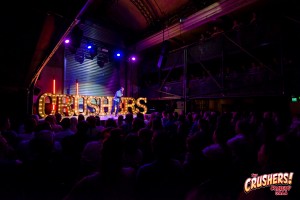 After a successful Fringe World season, The Crushers Comedy Gala is back for 1 night only! Saturday, April 17 at The Rechabite.

The Crushers Comedy Gala is a premium comedy showcase featuring comedians that are guaranteed CRUSHERS!
The term "Crusher" in comedy circles refers to a comedian that delivers the laughs and leaves audiences wanting more.

"Big atmosphere and lots of laughter, which is what this show at The Rechabite delivers in huge quantities" (4 stars) - The Fourth Wall

"...The Crushers are planning on dishing out more laughs and good times beyond Fringe as they continue their fun run at The Rechabite this year..." (4.75 stars) - Mystery Case

This will sell-out so get in early and secure your tix!